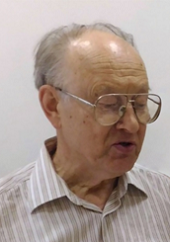 On October 1, 2021, Boris Ivanovich Kurganov, Chief Researcher of the A.N. Bach Institute of Biochemistry of the Russian Academy of Sciences, Doctor of Chemical Sciences, Professor, Honored Scientist of the Russian Federation, passed away. On 27th June 1938, Boris I. Kurganov was born in Lomonosov town and he was living in Moscow from 1943.

During 1955-1960 he was a student of the chemical faculty of the Moscow State University and graduated from the University with a red diploma. From 1960 to 1964 he studied for PhD at the Moscow State University. His PhD thesis: "Kinetic study of dissociation and denaturation of enzymes in dilute solutions" was defended in 1966, doctoral thesis - "Kinetic study of regulatory properties of enzymes" - in 1975. From 1964 he was a Junior Research Associate in N.N. Semenov Institute of Chemical Physics of USSR Academy of Sciences. From 1968 to 1988 B.I. Kurganov worked in the Scientific-Industrial Association "Vitamins" of Ministry of Medical Industry. From 1989 he was working in Bach Institute of Biochemistry of Russian Academy of Sciences where he was a Head of Laboratory of Enzyme Systems, then a Chief researcher in A.N. Bach Institute of Biochemistry, Research Center of Biotechnology of the Russian Academy of Sciences.

B.I. Kurganov made a significant contribution to the studying of the physico-chemical mechanisms of enzyme activity regulation - allosteric, dissociative and adsorption, realized by changing the conformational, oligomeric or adsorption state of the enzyme under the action of regulatory metabolites. He proposed the first theoretical models of dissociating and adsorption enzyme systems, developed principles for analyzing the kinetic behavior of dissociating enzyme systems, allowing to identify cooperative kinetic effects associated with the shift of equilibrium between oligomeric forms of the enzyme under the action of the effectors. B.I. Kurganov performed a theoretical analysis of the kinetic behavior of dissociating enzyme systems of various types. He justified the use of reversed hydrated micelles of a surfactant in an organic solvent to study the effect of enzymes on water-insoluble substrates and to study the inhibitory effect of water-insoluble compounds. B.I. Kurganov experimentally substantiated a new mechanism of protein aggregation, accompanied by the formation of amorphous aggregates. The initial stage of the process is the formation of start aggregates, including hundreds of denatured protein molecules. Further adhesion of the start aggregates proceeds in a kinetic regime, in which the aggregation rate is limited by the diffusion of colliding particles. It was revealed that the suppression of protein aggregation in the presence of chaperones was due to the inclusion of chaperone in the start aggregates, leading to a decrease in the probability of clumping of colliding particles. He developed methods for evaluating the effect of molecular and chemical chaperones, as well as methods for evaluating the effect of their combined action on the kinetics of protein aggregation. Methods for quantifying the effect of various agents on different stages of protein aggregation were proposed by B.I. Kurganov.

His colleagues who have been in close contact with him for the past decades describe Boris I. Kurganov in words as an honorable, intimate friend, bright person, extremely responsible, erudite, outstanding scientist, an exceptional person, and highly qualified specialist with a unique spirit of cooperation. His great scientific achievements in the last few decades as a valuable relic have paved the way for the future generations to expand the frontiers of knowledge into the .realms of the unknown

The beginning of scientific and research collaborations of this great and beloved scientist with Institute of Biochemistry and Biophysics (IBB), University of Tehran dates back to 2007 which then expanded to Protein Chemistry Laboratory (PCL) at Shiraz University. The above-mentioned collaboration has been well developed during the recent years and continued until the last days of Boris I. Kurganov.  Although, his absence is an irreparable loss to the global scientific community, but undoubtedly, the lasting scientific achievements of Boris I. Kurganov have made him an immortal figure.

:Below are some of our joint articles with Boris I. Kurganov

7- M. Amani, A. A. Moosavi-Movahedi, B. I. Kurganov "What can we get from varying scan rate in protein differential scanning calorimetry?" International Journal of Biological Macromolecules 99, 151-159 (2017)

10- K. Khoshaman, R. Yousefi, A. Niazi, A. Oryan, A.A. Moosavi-Movahedi and B. I. Kurganov "Importance of the positively charged residue at position 54 to the chaperoning function, conformational stability and amyloidogenic nature of human aA-crystallin" J. Biochem. 187-199 (2018)

The IBB colleagues and Iran Society of Biophysical Chemistry (ISOBC) members extend their condolences to the scientific and Chemico-Biological community on this great loss.  Hope that young researchers, while paying attention to the important scientific heritage of this wealth scientist, will expand the path of research that he has opened with great effort over many years to the unknown frontiers.